CycleTouring INFormation A journal of new information received at CTC

Great Cycling Photos from around the World

First post since mid-November! Many apologies but until a new CTC touring bod gets going, it’s not going to happen. Until then, the very occasional blog will be published, like this link to a great set of photos. Enjoy! 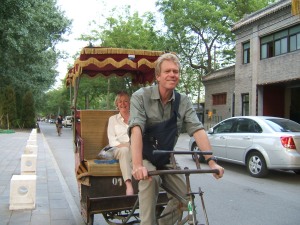 (I should mention that the photo on the right is not one of the ‘great cycling photos’ – it’s just me having a go at pedalling a rickshaw in Beijing with my mum in the passenger seat. She was a very nervous passenger – the smile is one of sheer terror. It wasn’t totally easy to pedal and the brakes were abominable.)